Wizards has announced today in Magic Arcana about the next Duel Decks, which is to arrive in April 2009. It is named Divine vs Demonic, regarded as the battle between good (White) and evil (Black). The deck design and development will be Nate Heiss and Erik Lauer and the exact date of release is April 10, 2009.

They also featured an art of a demon in the announcement, which I believe resembles Lord of the Pit. See it below: 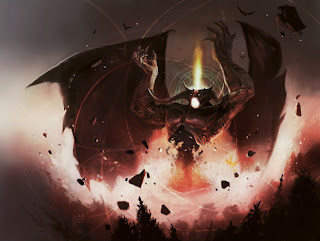 They will also include two alternate art foil mythic rare cards. I hope they are Conflux cards. It would be a good addition to the Standard decks and not only for collection purposes. Hehe... We'll just stay tuned for it. Check out the official announcement here.
Posted by Death Mark at 1:10 AM